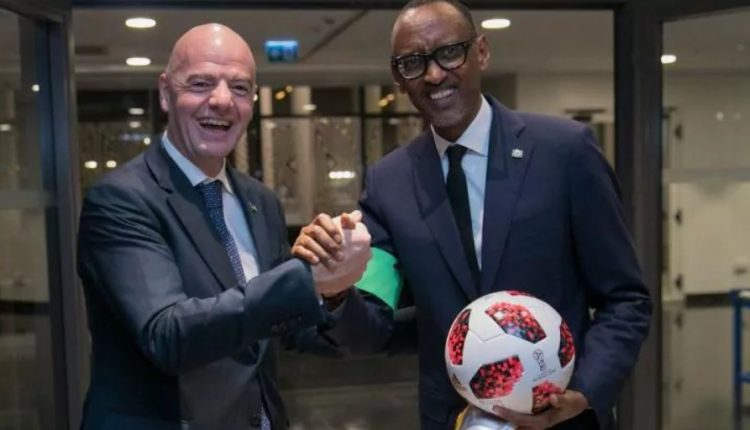 FIFA will hold its 73rd Congress, during which its next president will be elected, in Kigali, Rwanda. On the same occasion, elections for body’s new president will be held, with Gianni Infantino as sole candidate. French journalist Romain Molina criticized Rwandan case management, accused of fuelling war in DRC.

« Today, what is incredible is that there is not a word from the international sports authorities. They are quick to raise human rights, tolerance, etc. to sing at top of their voices about democracy, but on their Rwanda, there is not a word, » he said, in his video that accumulates more than 31 300 views.

In recent years, Rwanda has multiplied its investments in international sports, appearing on major clubs in the world the shirts including Arsenal (English Premier League) and Paris Saint-Germain with the slogan « Visit Rwanda ». « Rwanda has invested and knows where it has invested. They have a lot of public relations firms to improve their image and they do it very well. And all these partnerships they have give credibility to Paul Kagame’s regime.”

The Land of a Thousand Hills has earned itself a place of choice in international sporting bodies. Basketball Africa League (BAL) first edition, organized in a partnership between the NBA and FIBA, took place in Rwanda, as did 2022 finals. The Tour of Rwanda has been included in the list of tours recognized by the International Cycling Union (UCI), making Rwanda almost a « must » in world sport.

Rwanda’s influence is also expressed in events and positions, Molina said. FIFA regional office has been established in Kigali and the new ethics boss is none other than former prosecutor of Rwanda, according to the author of « The Beautiful Game: soccer, wars and politics ». « We knew Rwanda for other reasons, but today we also know it for sport. Hence the interest in having initiated partnerships with Arsenal and everything else. According to the Rwandan Ministry of Tourism, this has had an impact on visits to his country. »

« The media is not talking about it »

Referring to supposed partnership between Rwanda and PSG, which Congolese twitter community castigates with #RwandaIsKilling, Molina clarifies that « in reality, PSG-Rwanda’s partnership is a Qatar-Rwanda agreement. Qatar uses PSG to negotiate certain contracts in Africa where Qatar invests. The deal is political. »

« Rwanda weighs in at every level of international sport even up to the FIFA ethics committee, potentially the most important jurisdiction in sport, due to the popularity of football. It should come as no surprise that Rwanda will ask to host an African Cup of Nations in the future. »

According to ICRC, clashes between M23 and Congolese armed forces, FARDC, caused more than 72,000 displaced people at end of May. This figure may have changed. Romain Molina is especially critical of media’s silence on the issue. « Meanwhile, people are dying. There is the troubled role of Rwanda in the war in the east of DRC, media do not talk about it, even in Africa. It is one of forgotten conflicts because we do not get to know truth. There are many people dying in Eastern Congo in silence, animals are victims of poachers or trafficking.

“Sports institutions are very practical in order to hide certain acts, » he concludes, in his analysis of the geopolitics of sport.