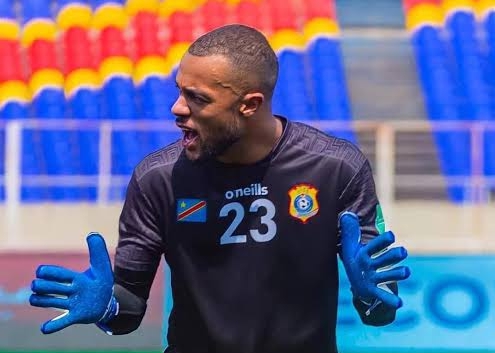 For a long time, Joël Kiassumbua has been an indisputable member of DRC national team, but he is no longer unanimously supported by national team’s supporters or by members of the technical staff. Without a club and with mixed performances, Congolese last line of defense is still being criticized.

The last two games against Gabon (0-1) and Sudan (1-2), Joel Kiassumbua did not add credit to the little confidence he had left with Congo’s public. Since his departure from Servette (Switzerland) in August 2021, he has not signed a contract with another club and has almost a year off. This situation puts him in a fragile position when it comes to playing high-stakes matches, such as the last two qualifiers.

According to FootRDC, the 30-year-old goalkeeper’s name was not on the list of six names submitted to Hector Cuper for pre-selection of the June gathering. A senior member of national team felt it was necessary to leave him out, as « he has not played for several months ».

However, after his technical meeting with his deputies, including Robert Kidiaba who looks after the goalkeepers, Hector Cuper decided to call up Kiassumbua. Cuper’s decision-making power is not debatable, we were told, « he has the final say ».

While Lucerne native’s relationship with coaching staff remains impeccable, the man who has been honoring his caps since 2015 is no longer in the public eye. Some of the national team’s executives were « strongly opposed to his starting line-up » against Sudan.

Until the eve of the match, on evening of 6 June, indecision reigned over goalkeeper’s choice who would protect Congolese poles, before Cuper decided to reappoint Kiassumbua.

« We are talking about a goalkeeper who has not had any playing time; otherwise it would have been better. We lost because of a goalkeeper who does not play, » complained one of the assistants in technical staff, who requested anonymity, in an interview with FootRDC, two days before Sudan game and defeat against Gabon in Kinshasa.

Undisputed starter status attributed to Kiassumbua by « the Boss » is thus criticized internally. Robert Kidiaba, goalkeepers’ coach, told us that he « respects Hector Cuper’s choices. Sidi Baggio will have his time and he will have to take his chance if he plays. TP Mazembe’s legend said he « talks well with all my goalkeepers. I know that when a goalkeeper plays and you are on the bench, you just have to wait your turn and take your chance when it comes. »

Hector Cuper’s rumoured, but far from actual, departure could reshuffle deck at goalkeeper when DRC next gathers in September ahead of the all-important match against Mauritania in Nouakchott.